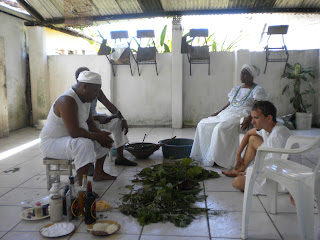 I am a Belgian anthropologist, assistant professor (‘maître de conférence’) at the University of Nice Sophia-Antipolis (France) since 2007. I graduated in Anthropology at the Free University of Brussels (Belgium) and I received my PhD in 2005 from the Ecole des Hautes Etudes en Sciences Sociales (Paris-France). After studying an Afro-Brazilian cult in Belgium during my graduation, I traveled to Brazil where I conducted extensive fieldwork in the Xangô Cult, an Afro-Brazilian possession Cult of the city of Recife, in the North-East Region of Brazil. Since my first ethnographic steps in Afro-Brazilian religions, my research focuses on how religion is learnt, exploring, from an ethnographic perspective, the mutual influence between cognitive, sensory, emotional and social dimensions of religious learning.
Since 2017, I am developing a new research in medical anthropology, working with patients suffering from a skin disease called psoriasis. I am interested in the first place in patient's experiential knowledge of illness. Through ethnographic methods, my aim is to show how psoriasis changes the way these persons relate to themselves (body, mind, emotions) and to others in their daily lives, as well as how, through their therapeutic journey, their learn to develop coping strategies despite chronic symptoms.